We hope you had a great labor day weekend. This holiday marks the unofficial start of the campaign season as students are back to school, and most people are back to work from their summer vacations. We hope for your continued attention and involvement in our efforts to bring crime victims the rights they deserve in Nevada as we head into the last 63 days. 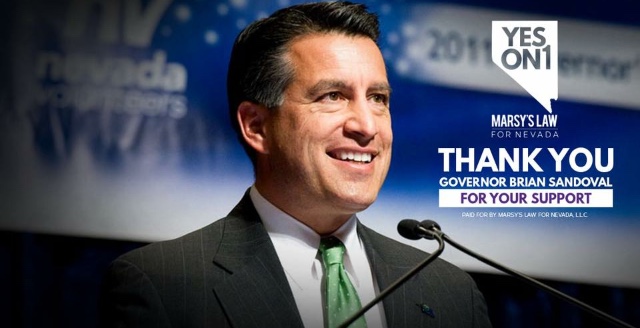 With Early Voting and the General Election on the horizon, the Marsy’s Law for Nevada team is energized by two major new endorsements for our victims’ rights effort. Nevada Governor Brian Sandoval joined respected civic and state leaders, standing united on behalf of victims of crime. “I am proud to endorse Marsy’s Law,” Governor Sandoval said. “It is time for Nevada’s constitution to contain strong, enforceable rights for victims of crime. Marsy’s Law for Nevada will guarantee victims have a voice in the criminal justice system and ensure they are treated with the dignity and respect that they deserve. I urge all Nevada voters to join me in voting Yes on Question 1.” Governor Sandoval is respected by Nevada leaders statewide for his dedication to residents, and his ability to unite people. Governor Sandoval also served as Nevada’s Attorney General, and was appointed by then-President George W. Bush as a United States District Court Judge for the District of Nevada, presiding over federal court cases in Nevada. 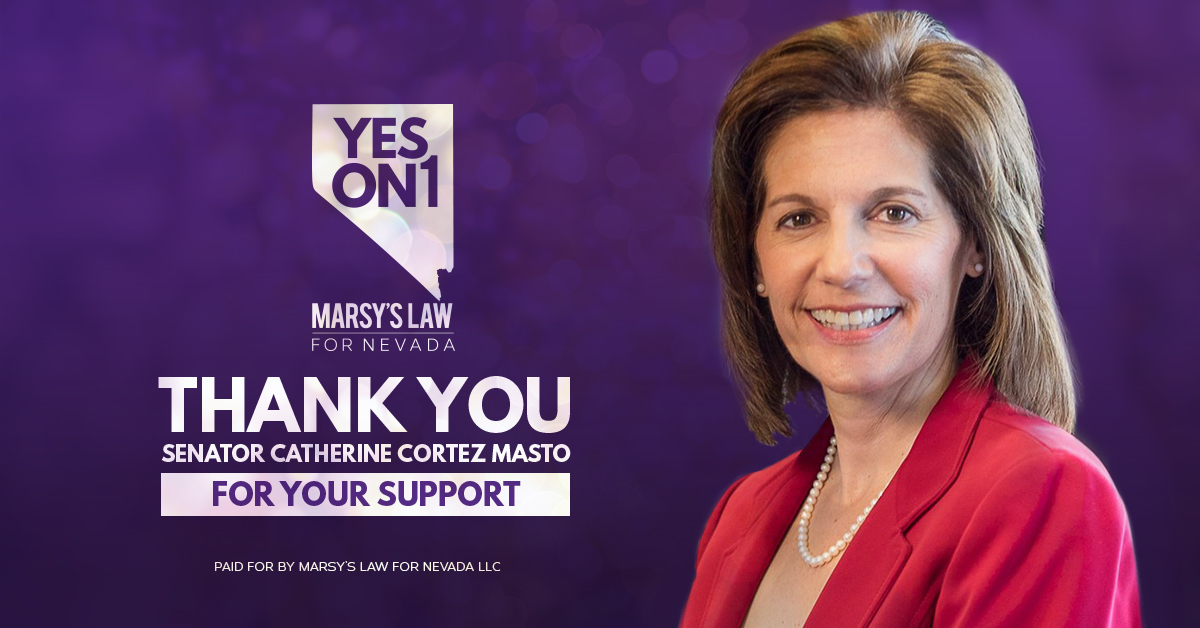 Nevada's United States Senator Catherine Cortez Masto added her voice to the call for expanded victims’ rights early in August. “As Nevada’s Attorney General I fought for the rights of survivors of human trafficking, sexual exploitation, elder abuse, and fraud” said Senator Cortez Masto. “I’ve seen the struggles firsthand that survivors of crime go through in rebuilding their lives. Which is why I fought for the rights of human trafficking victims through support and assistance. Our legislature has twice approved amending our state constitution to enshrine these rights. And now, I know that Nevadans will speak up loudly in support of Question 1, and I am proud to join them in using my voice to support it as well.”  Senator Cortez Masto’s endorsement echoes her focus on protecting citizens. She served two terms as Attorney General of Nevada, and worked closely with local law enforcement to make Nevada safer for all who call it home. Just another example of the strength of Marsy’s Law for Nevada. 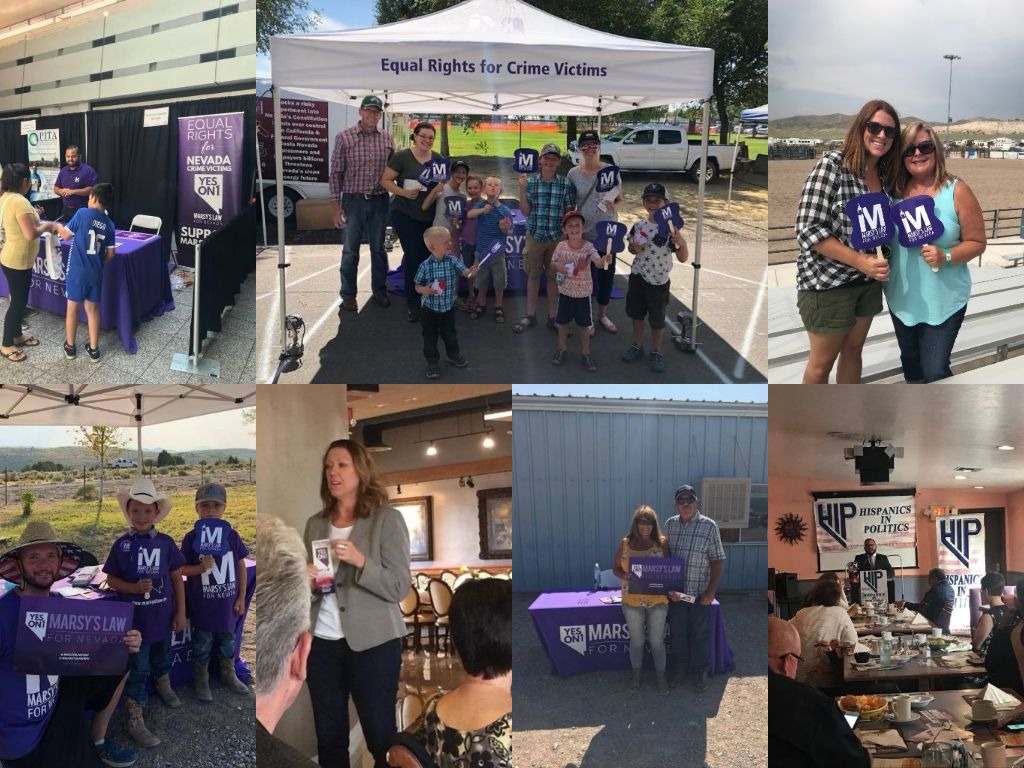 Marsy’s Law advocates continue to provide information to Nevadans at events and group meetings. August included our state Director, Will Batista speaking to Hispanics in Politics - the oldest Hispanic political organization in Nevada. Our Field Staffers have been busy traveling around the state as they spoke to voters at the Elko, Lincoln, and Lyon County Fairs. Our team was also present at the La Oportunidad Expo - hosted by the Las Vegas Latin Chamber of Commerce who endorsed our efforts early last year. 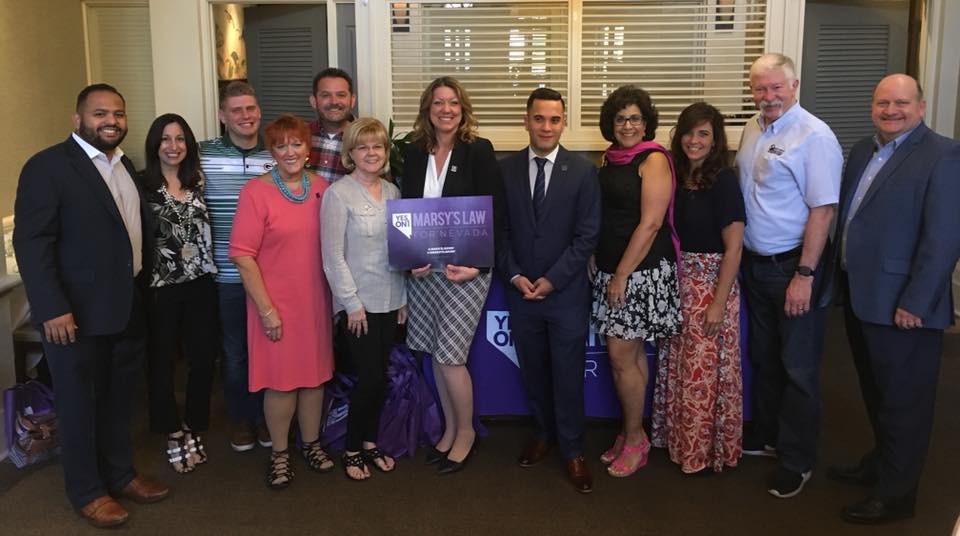 We were also honored to have hosted the Faith in Action breakfast where we met with community leaders and to connect them with local domestic violence resource centers which can help as an extension of the services they provide to members they serve. We also had the opportunity to speak with them about the importance of voting Yes on Question 1.

We invite you to stay connected via our Twitter & Facebook pages, or by visiting our website. Keep us informed about any events we can attend to share information about our effort as we head toward the start of Early Voting on October 20th and the General Election set for Tuesday, November 6th, 2018.

Sign up to receive our monthly newsletter and updates.